On July 17, 2019, the SMART Office held a symposium to promote strategies to prevent sexual violence, a strategy which included promotion of the public registry. The Alliance formed of various registry reform organizations, including SOSEN, believes that prevention of sexual violence is important, but we remain skeptical that a publicly accessible registry is part of the strategy. Thus, we felt it important to attend the symposium held by the SMART Office.

About a dozen members of various organizations, includi 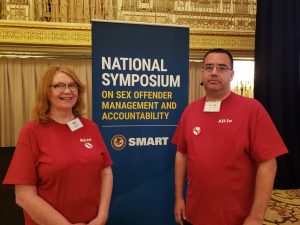 ng Women Against Registry, OnceFallen, SOSEN, CURE-SORT, FAC, ACSOL, and other groups attended. (NARSOL backed out of the alliance.) Most of us wore red shirts as a sign of unity; the front read “All In,” the back read “The Registry Does Not Protect Children.” We also wore buttons with the words “SORNA” with a red line through the letters. These shirts and buttons made it easy for us to approach people to discuss our position on the registry. Curious people had no reservations asking us about our shirts and buttons. It gave us opportunities to speak to event attendees throughout the day.

The day began with intros from various dignitaries, including Jon R. Lausch, Jr., the US Attorney for the North District of Illinois, who stated sex crimes are all “reprehensible crimes” and victims are “damaged forever.” Statements like this harm victims because it tells them they can never heal; victims hearing this statement may lack motivation to heal.

John F. Clark, current President and CEO of NCMEC gave an intro focused on discussing increasing technology in modern society. He made a comment regarding today’s technology as “George Orwell on Steroids.” I found this statement very profound. I did hear a good idea from Mr. Clark. NCMEC has a wall mural in which visitors can scribble messages; perhaps we can incorporate a similar strategy for future Anti-Registry Movement art events. Also worth noting is his statement that 38% of cybertip line reports of the 20 year history of this tip line occurred in 2018. Perhaps it was due to the high-profile media stories, or perhaps there was an increase on cyberbullying (also mentioned) by Mr. Clark offered no reasons for the spike, so we can only speculate the reasons.

Katherine T. Sullivan, Principal Deputy Assistant Attorney General, invoked the Larry Nassar case. Ms. Sullvan stated that while most “sex offenders” are “NOT future threats,” she added “it only takes one like him” to destroy “untold lives.”

Stacie B. Harris discussed the PROTECT Act’s report on the “National Strategy for Child Sexual Exploitation and Interdiction,” a public document published first in 2010 and 2016, and the 2020 version is under review. Those at the event were asked to contribute to this paper through public statement.

After a short break, there was a discussion about the use of DNA to solve a 1988 rape/ murder case of April Tinsley. The killer had no prior adult arrest record (but had a juvenile sex offense arrest), and lacked records in the DNA and fingerprint databases. The investigator used the term “pervert” a few times throughout the lecture and engaged in some typical police chest-thumping., like bragging how he would have “taken him down” if the suspect entered a nearby park. (It is also worth noting the presenter described a minor who found and a note taunting the police as a “victim.”) This case had 1300 suspects, but was only able to eliminate 900 cases due to jail records or DNA

Throughout the two-day symposium, we would hear this prevailing theme of stating few statistics but plenty of anecdotal examples utilized to promote the need for SORNA. Unsurprisingly, the few statistics presented were all favorable to SORNA

Gini and I spoke with a number of people throughout the day. Gini spoke with NCMEC President/ CEO John F. Clark. Gini presented Mr. Clark with the position statement created by SOSEN and OnceFallen and expressed our desire for a system based upon evidence rather than fear. I was stopped by two different law enforcement agents curious about my shirt during the first break of the day. The first cop was from Niagra NY and he was unashamedly pro-registry, but softened up a bit when I reminded him about how a NY study found most sex crimes were committed by those with no prior sex offense arrest record. A second LEO agent from Southern Indiana expressed his skepticism to the registry, noting those skeptical of the registry don’t often talk about the skepticism because of concerns people will state they’re “lousy” at their jobs. Gini spoke to a cop from the Chicago PD that shared the skepticism of the Indiana cop. My personal experience is that many LEOs working directly with registering folks share this skepticism.

Gini and I stayed together for the two afternoon workshops. For the first afternoon workshop, we chose the workshop “Library of Congress Research on SORNA.” It seems the Library of Congress also has a vested interest in promoting SORNA. Their presentation was a wholesale denial of the impact studies. They claimed nearly every study regarding skeptical of efficacy of the registry, the collateral consequences, and the cost of SORNA were considered invalid by their standards. Interestingly, they used a 2008 Adam Walsh Act cost study as an example. They claimed a certain study estimating a cost benefit analysis was invalid for Ohio because they used a formula based on a Virginia cost study, but considered an Ohio legislative report that only considered the cost of the Offender Watch software in their cost analysis. I confronted them with a number of facts about the true cost of the registry in Ohio due to increased number of lifetime registrants. I also asked them if they treated SMART’s choice of research with the same skepticism, bringing up the Prentky study as an example. Judging by the reaction to Prentky, it seems the Library of Congress did not give the SMART propaganda the same degree of skepticism.

Gini and I chose to sit in the workshop on “Investigating and Prosecuting FTR Cases in Indian Country.” Tribal laws are rather complex, so I was learning something new. But I still had the opportunity to pepper a US Marshal about their claims of having authority to conduct compliance checks. He could not cite a specific statute, stating it was some administrative decision. (He’d give me a different answer the next day that is was somewhere around 18 USC 500 and I’ll just have to Google it, and federal law gives them the authority to create “task forces.”

I believe the most infuriating discussion I had during the entire event came after the last workshop of the day. As Gini and I waited for the rest of our team, a very large Native American from Montana struck up a conversation with us; he started of by gloating that anyone who hurts their “precious ones” are exiled from their tribal lands. I told him how appalled I was and said it reminds me of the Old Testament. He also told me how much he hates Christians, especially Catholics, because “all priests are pedophiles.” (Incidentally, I happen to be both Native American and Catholic.) On the upside, he told me that the Crow nation has a reintegration program, so my faith in my Native ancestors was at least partially restored.

After a full day of dealing with SMART Office propaganda and personal biases of numerous symposium attendees, Gini and I weren’t as excited about day two. Gini decided to attend the workshop on “Psychopathic Sex Offenders” while I chose the workshop for “Investigating State and Federal Failure to Register Cases.” The highlight of the presentation I attended was watching Angela Serafin, deputy of the Bernalillo Co NM Sheriff’s Department, was completely schooled on her presentation by a member of the New Mexico Department of Public Safety. It shows many of the local police have no clue about the actual laws they are paid to enforce.

Gini suffered through probably the worst of the sessions, full of discussions about “predators and pedophiles.” Gini told me one of the presenters was Marnie Dollinger, who worked at the Moose Lake MN Civil Commitment Center. We both sought Marnie; upon finding her, Gini and I took turns criticizing the program; Gini told her the center was both a waste of resources and a concentration camp, and I had told her that if her program only released their prisoners in body bags, then her program needs to find a better strategy.

Gini and I stayed near the main ballroom during the lunch break; since we still had a few fliers left, we left a few on random tables, particularly the “reserved tables.” We had a nice chat with a man who runs a prison outreach group connected to the Wayside Cross Ministries. We stayed for one last presentation on “Using Analytical Data to Assist With ‘Sex Offender’ Based Operations.” (Or, if you prefer, how to Data-Mine.) There was nothing significant to note except for one slide used in discussing investigating whether a registrant is dead. The slide used a fictitious address of “666 Dead Sex Offender Lane.” This was yet another subtle, passive-aggressive swipe at registered persons.

To review, I feel like the event went the way we expected it to happen. There were over a dozen activists working to speak with a diverse number of people. The shirts were conversation starters. Not every conversation we had were met with dismissal or skepticism. We also heard a fair share of pro-registry propaganda. I did not hear many stats, only plenty of anecdotes. It was also good to work in cooperation with other organizations working for a common cause. SOSEN was well-represented at this event, as were the other organizations in this alliance. I believe going to this event was also a worthwhile investment. I am certain the other groups in this alliance would agree.

16 comments for “SOSEN, Alliance of registry reform activists at the SMART Office Symposium”